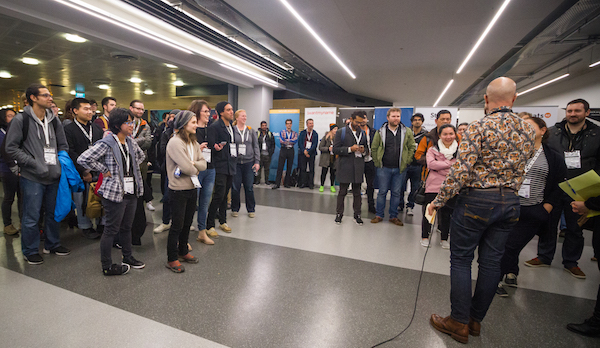 I recently facilitated the team-forming process for GovHack 2017 in Wellington. I have facilitated team-forming for three GovHack events and for other hackathons such as Open Data Day and Datarama. Over these events, I have developed a process that you may find valuable for opening hackathons. I’ll describe my process and some of my thinking about it.

Participants come to a hackathon to work in teams to create prototype solutions to real world problems. They usually work really hard together for a day or two. At the end of the event, teams present the ideas – and themselves as teams, to each other and VIP guests. There is an incredible spirit of fun, accomplishment, innovation, goodwill and collaboration in these moments.

At the beginning of a hackathon, most participants arrive with no team, and no idea of what they are going to work on. The goal of the team-forming process is that everyone is in a team with a defined problem to solve.

At previous hackathons, I have used a different approach to team-forming. At GovHack Wellington in 2016, I encouraged teams to form as soon as they can and move on to a Definition Lab where mentors helped them to document their ideas using a project canvas. This had the strength that the mentors worked with batches of teams as they came through. It rewarded teams for coming prepared or forming quickly. Where it failed is that the people who had not yet formed teams found it progressively more difficult to do so. I was very unhappy with the experience that this created for the people who were the last to form teams. I approached the team-forming this year with the single goal of everyone being in a team with an idea. I designed a process that everyone would move through together, whether they had a pre-formed team and idea or not. This meant that we could not feed people in batches through a Definition Lab. I considered that a price worth paying to create a culture of fun, inclusion and making the world better from the opening moments.

Everyone in a team with an idea

I begin the process with matter-of-fact statements to put people at ease. I mention the time, and the planned finish time. Here are the notes for the remainder of my warm-up talk:

I deliberately repeat some parts of this to create a sense of unhurried focus on this one result.

Participative research into who is here

To introduce this process, I mention that when forming teams, everyone is going to make some choices about the make-up of their team. To do this, they will need to know a little about the people in the room. I also know that I have spoken a lot already, and I want people to warm up to interaction.

I ask the group members standing in a large circle (or nearest shape), one person deep. I explain that we will explore what sector people work in.

I ask one person to step forward and mention the sector they work in. I may generalise their response to create a sector such as government. I ask all the people in the government sector to stand close to this person. I repeat this process with other large groups such as the private sector, education and NGOs. I encourage group members to notice where they are and where others are – who is near, who is far, how many are in each group.

This warms people up to being researchers for their own cause. I invite one or two group members to describe what they see.  They may say “there are twice as many govt people as there are private sector”. I invite interpretations. An interpretation might be “we are likely to have plenty of govt experience in our teams but less private sector thinking”. With a smaller group, or more time available, I may facilitate an investigation into the composition of some of the larger groups. To warm people up more to interaction, and to build new links in the group, I ask each person to find out from the person next to them why they put themselves in the group they are in.

I repeat this process with people’s primary skill, usually pre-empting these as technical, creative or entrepreneurial.

With the group back in the large circle, I ask for someone to step forward and name the general area that their idea fits within.

These might be health, housing, education or  little narrower such as tech education. I keep them broad and briefly described so that they can be shaped by other team members. When there is enough of these for each team to have five or so people I ask the idea-holders to stand in a line. I ask them to each say their name and a three word description of their idea, passing the mic between them. Once this is done, I ask everyone to join one of the teams.

Everyone is in a team with an idea but the ideas are broad and not yet shaped by the team.

I give the teams five minutes to discuss ideas within the area that each team has chosen. I ask the teams to stand together but separate from each other, in the large circle.

I then ask for a 30s pitch from one person from each team, describing two things:

They pass the mic from team to team. I follow with a timer.

It is great to have someone video these, as it provides a little more challenge to stretch into. It also creates a great record of the ideas in their early stages. Often the teams already have a name and can clearly describe the problem they are focusing on. During this process, some teams merged. I invited people to switch teams on their own, if strongly pulled to do so, and some did.

By this stage, teams have already become quite stable but may not have quite the skill mix they need.

I gave the teams two minutes to investigate the skills in their group. Then I invited teams to pitch for the skills that they need. Some of these were successful.

The teams were formed.

I asked all the teams to pick up one of the project idea canvases we had prepared, to find a room, and to begin documenting their idea on the project canvas. Mentors visited the teams to help with that.